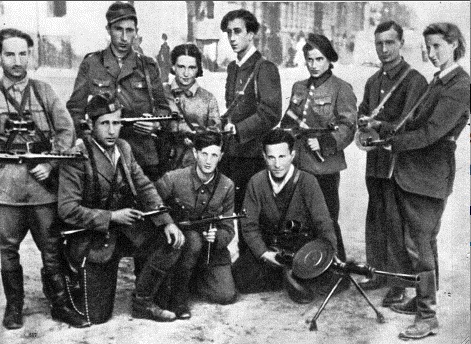 THE CAUSE KEPT TEM ALIVE

The Warsaw Ghetto, an era and a decision with many dilemmas that no one imagined would face. 33% of the Jews were forced by German forces to stay in a specific area just for them, known as the infamous Warsaw Ghetto. This had an area of 1,125 square kilometers and a total of 400,000 Polish Jews (that is, for every 100 square meters 1,306 people were housed).

In the Ghetto, people lived in very bad conditions, there were lethal and contagious diseases due to poor hygiene conditions. People were starving, the Germans only allowed them to buy very little bread and potatoes, and only those who had money or valuables to exchange. The other people were involved in the horrible situation, begging or stealing in order to survive.

Also, in very cold times there was not enough gas for all the heaters in the apartments and most people lacked adequate winter clothing. Many people died of cold, hunger, or diseases. Unfortunately, these situations caused many children to be orphaned, forcing other families to care for them.

A characteristic of the children in the Warsaw Ghetto was that they survived by smuggling pieces of bread. They desperately fled the Ghetto by crawling through the small openings in the walls and put themselves in the risky situation of returning with food for their family and friends. This was very dangerous since if the Nazi Germans who guarded the ghetto walls saw them, the smugglers were subjected to severe punishment.

This is where we find the first dilemma: it was not at all safe for children to sneak out of the ghetto. This implied a clear risk of death. Faced with this dilemma, these children decided to take risks in order to help themselves and others.

The Germans begin with the deportation of Jews from the Ghetto to the Treblinka death camp.

At this moment the Ghetto was filled with a wave of despair and uncertainty. First, they took the sick, the elderly, and the homeless. 265,000 people were transferred and killed.

Faced with constant uncertainty, perhaps to distract themselves or perhaps as a way to face the fear they had, some young people began to gather to create a plan for the Resistance. One of the groups that was created was the ZOB, Zydowska Organizacia Bojowa (Jewish Combatant Organization). This movement included Simcha Rotem, an 18-year-old Polish Jew from the Hanoar Hatzioni Movement. They also called him Kazik, which is the abbreviation for “Kazimierz” which means in Polish “the one who destroys the prestige / glory of his opponent in battle”, because as his name says well, he never surrendered in front of the Nazis.

It all started with small power struggles against the Nazis in the ghetto, but things escalated and a series of groups motivated by the same ideals were created. There were sabotages and small attacks against the German orders. And little by little, the young people began to realize that although despair initially prevailed, with each action taken, other reasons for exercising their rebellion increased: the reason for giving meaning to their lives, not dying in vain. This was what encouraged them to continue. This was their ideology.

Here we are faced with the second dilemma: young Jews within the Ghetto knew that if they fought and attacked, they could end up worse, but if they did not, they would die anyway. Faced with this dilemma, these young people decided to fight.

The Germans faced the Jewish resistance for the first time.

This surprising resistance came to light. Many saw themselves as defenseless against the Germans, as they did not have the same number of weapons or people. However, the young rebels had their motives, their inspiration, to give their lives for their people. Decide, even if it is them, their end instead of it being determined by Nazi Germany. These young men knew that they would have to die (in some field or killed in the streets of Warsaw), but they preferred to die for cause, instead of dying in vain. That is not despair, it is ideology. And this was the answer they found to this dilemma.

Simcha Rotem said: “At first, when I saw the huge German forces enter the ghetto, my first reaction, and I am sure it was not just mine, was to feel that we were nothing. What could we do with our pathetic and almost nonexistent weapons as we faced the tremendous German armed power with cannons, tanks, and a huge infantry of hundreds if not thousands of soldiers? I felt completely helpless. ” However, Rotem’s feelings were followed by an extraordinary sense of spiritual inspiration. Thus, Rotem said: “That was the moment we had been waiting to face that almighty Germany.” The rebels had this stance: “We would kill as many as we could; we knew that our destiny was completely clear”. The youths managed to kill 16 Nazis and left approximately 100 wounded.

The Germans began to burn the streets of the ghetto, but the rebel Jews remained fighting for several more days before being killed. Simcha Rotem along with Zivia Lubekin (one of the leaders of the uprising) managed to help about 80 people escape down the Ghetto drain to the Aryan zone. After escaping, they hid in the forest until the end of the war.

After Simcha Rotem’s death in 2018, Aliza Vitis-Shomron, the last survivor of the Warsaw Ghetto said tearfully: “It is a difficult day because this really means it is over. I am the last one left and there is no one else who can keep the story alive. He was the last fighter. I will continue speaking until my last day of life, but nobody lives eternally. After me, who will continue telling it?”

Here we find the third dilemma. A dilemma that started that Seder night, and that continues until our Pesach. Dilemma posed by Aliza without naming, without awarding positions, but which I attribute to each educator, to each educator of our Tnua: “Do you commit to give an answer to Aliza’s question? Do you encourage yourself to keep telling the story?”

As a conclusion. As an invitation.

As madrichim and madrichot we can ensure that the truth is not hidden, that the facts are open to the world. Because, after all, like Simcha and Aliza, many millions were part of this, and we must not forget them by keeping silent.

Therefore, my invitation to those who read this article is as follows: Let’s tell stories, testimonies, open the doors and make everyone an expert on the subject. The Jewish people are alive today to tell what happened, to prevent this from happening again.

The Warsaw Ghetto Uprising allows us to learn how rebellions sometimes start out of despair or fear, but in the Jewish people they are always accompanied by an ideology, a reason to rebel. In the Shoa, for many, that cause was what kept them alive.