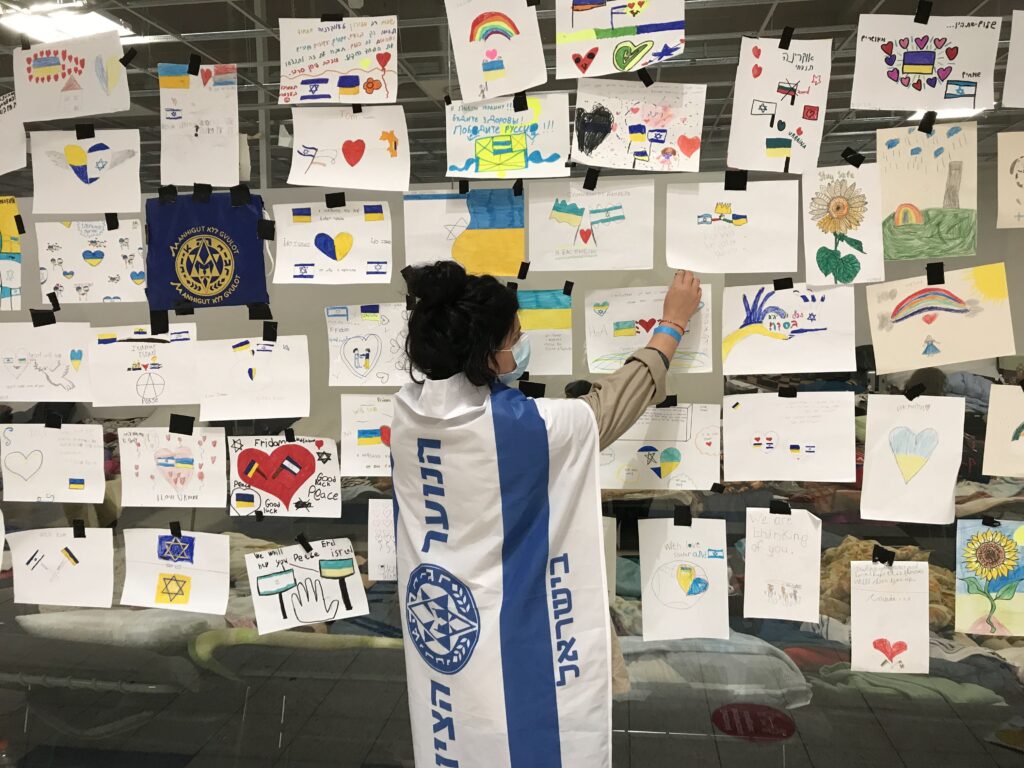 From our experience at the Humanitarian Aid Center in Przemyśl I took several images.In this article I want to share the first image that I took, which is that of the first visit, when we arrived on Thursday around 9pm to the Center to know it, feel it and take us a first approximation of the place where we were going to work the next 7 days.In that image I see myself in front of an abandoned shopping mall that has been reused as a center that receives refugee women with their sons and daughters and refugees men and women over 65 years old.They arrive carrying some bags, all very warm.There are some campfires in the parking lot so I am permeated by the smell of burnt firewood.I go through the transparent doors and clearly see the sign that says “no cameras”.It was forbidden to enter to make notes and film from the inside.Entering I come across long lines of people who are waiting to sign up for a list.There are different stalls where they distribute different things: hot food, cell phone sim cards, pharmacy items.We pass between people and the human warmth and the place is felt.I begin to feel the pressure around me in the environment.I decide it’s not the time to get into myself, but to continue where we were being taken.Two social workers from the Natan organization were waiting for us, we were looking for them.Within the shopping mall there were two sectors.The first, which we had already entered, and the second, which was entered by volunteers and refugees who had already registered on the arrivals lists.The TS that were waiting for us came to look for us and let us enter that second sector.There I found large rooms, which surely at another time had functioned as premises.Now they were full of bunks and mattresses.Each place gathered people according to the destinations they would follow.Throughout this sector and the previous one, there were people with improvised posters that in Russian or Ukrainian had written possible destinations and telephone numbers.Destiny was at stake in a revived shopping mall.

The Local 10 was divided into two. A rectangle 50 meters long were occupied by refugees waiting to go to Germany, and a square of about 20 square meters, which had toys, stuffed animals, a TV, carpet, colored pencils and drawings. There we arrived and the TS began to tell us what was happening in that shopping mall that had both order and disorder at the same time. They told us about their organization, their way of approaching, the importance of questioning people who seem to be lost or sad, of not asking deep questions about feelings, but by focusing the questions about the action plan in the near future. At the time of trauma and without tools, it was not necessary to delve into feelings, but to accompany. They took us for a walk around the center. From the circular part of the Shopping opened a rectangular annex of about 100 square meters where there were more beds and more refugees. We stumbled upon the donation stand for refugee animals and arrived at the general donation reception center, another place of 100 square meters, where there were tons of drawers with donations of clothes, medicines, baby items, household items, cleaning, games and so on. That’s when I was introduced to the phrase that accompanied me all week: human beings have the same capacity to destroy as to build, the same capacity to love as to hate, to value life as to detract from it.

As Uri, Dai and I had done on behalf of Hanoar Hatzioni and the “Manhigut lelo gvulot” project and in conjunction with the Hashomer Hatzair delegation, hundreds of people were in their yellow vests volunteering: cooking, writing down lists, managing and moving, receiving, sorting, distributing donations, distinguishing and approaching people who were lost, helping people who knew where they wanted to go but couldn’t get on a bus.Hundreds of people helping thousands of other people who had run away from their home, which was destroyed or at risk of, who had left their home, their school, their club, their parks, their parents, their siblings. People who heard for days missiles falling near them, people who knew for sure that there are other people who could not get out, people who had reduced their belongings to a few bags capable of being loaded through the cold, on trains, buses, on foot. That encounter between power and wanting to give selflessly and the need to receive, to believe that there were human beings who cared about their lives (and care) put in feelings, image and word the magical transformative power of human beings. And inevitably I was reminded of the destructive power of human beings, the cause of that encounter.

That idea that went around over my head those days and that continues to go around, far from being in thought, was transformed into embracing, smile, game, laughter, dance, song, drawing, creation, response, action. We were the only delegation whose main objective came to be to give attention and containment to children and adolescents. Like Tnuot Noar, we were where we had to be doing what we could do better. And this action made me break with the duality with which I had arrived at the Center, duality in which we occupied the place of givers and the refugees the place of reception. We also receive, and not only gratitude, but we receive models and examples of strength, courage, resistance, organizing, finding empowerment and strength in smaller, such as singing, painting nails, hugging, doing a pirouette and playing, which is after all what gives us back the ability to feel and, therefore, humanity. We receive above all the affirmation that the creative, magical and transforming capacity of human beings will always surpass the destructive capacity.